By Doreen Carvajal for the New York Times

ARCOS DE LA FRONTERA, Spain — I still wonder how I ended up living in a former medieval bordello on the brink of a sandstone cliff on the southern frontier of Spain. 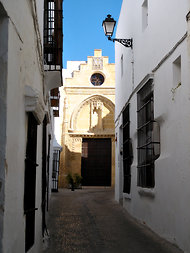 It was 2008, the start of the Andalusian region’s economic meltdown, La Crisis, and anxiety spread like the Black Plague. But from the roof of my apartment in this ancient white pueblo, I plunged back in time.

The other world worried about bills, real estate values, tourism, lost jobs, the immediate future. In contrast, I retreated into my quest, hoping to take new stock of my identity by reclaiming ancestral memories, history and DNA clues that I believe had been faithfully passed down for generations of my family, the Carvajals.

They had left Spain centuries ago, during the Inquisition. That much I knew. We were raised as Catholics in Costa Rica and California, but late in life I finally started collecting the nagging clues of a very clandestine identity: that we were descendants of secret Sephardic Jews — Christian converts known as conversos, or Anusim (Hebrew for the forced ones) or even Marranos, which in Spanish means swine.

I didn’t know if my family had a connection to the white pueblo. But by living in its labyrinth of narrow cobblestone streets, I hoped to understand the fears that shaped the secret lives of my own family.

History is a part of daily life in the old quarter, where Inquisition trials were staged and neighbors spied on neighbors, dutifully reporting heretics — Christian converts who were secretly practicing Judaism. The former Jewish quarter, where white houses plunge down a steep, silvery lane, is still standing, though unmarked by any street sign. I wanted to understand why my family guarded secret identities for generations with such inexplicable fear and caution. When my aunt died a few years ago, she left instructions barring a priest from presiding over her funeral; my grandmother did the same.

There are scientific studies exploring whether the history of our ancestors is somehow a part of us, inherited in unexpected ways through a vast chemical network in our cells that controls genes, switching them on and off. At the heart of the field, known as epigenetics, is the notion that genes have memory and that the lives of our grandparents — what they breathed, saw and ate — can directly affect us decades later.

Recent studies in Sweden explore the effects of famine and abundant harvests on thehealth of descendants four generations later. That is not exactly what I am looking for: I’m intrigued by the notion that generations pass on particular survival skills and an unconscious sense of identity that stands the test of centuries.

The French psychologist Anne Ancelin Schützenberger, now in her 90s, has spent decades studying what she calls the ancestor syndrome — that we are links in a chain of generations, unconsciously affected by their suffering or unfinished business until we acknowledge the past.

In the 1990s Dina Wardi, a psychotherapist in Jerusalem, worked with the children of Holocaust survivors and developed the theory that survivor parents often designated certain children as “memorial candles” who took on the mission of serving as a link to preserve the past and connect the future. The children of survivors who actively struggled against the Nazis, she found, had a compulsive ambition to achieve.

A similar strategy existed among the forced converts, the Anusim: Usually older women were entrusted with passing on information about their secret identity to particular younger family members. In our family, the historian was my great-aunt Luz, whose name means light in Spanish. I lived for a summer in her house in San José, Costa Rica, but she never confided in me, and regrettably I was not curious enough about our past to ask questions.

But recently, my cousin Rosie told me that she had made it her mission to question Aunt Luz at a family gathering. Given our family penchant for secrecy, she taped the conversation with a hidden recorder.

“Luz told me that our family came from Spain,” Rosie said. “She asked me, ‘Has your mother ever told you that we are Sefarditas?’ Of course, when I brought it up with my mother, she refused to talk.”

Read the rest of the article here